“Luck is what happens when preparation meets opportunity."

GrowthCLUB is your chance to step up and get further business focus. We’ll work with you to map out a winning game plan for your business over the next 90 days. You will learn strategies to increase profits, work fewer hours and build winning teams which you can adapt and adopt to get them working for your business. You will walk away with an easy week-by-week action plan that will show you exactly what to do and when.

By attending you will achieve the following:

GET IN TOUCH FOR MORE INFO

Sign up for our upcoming event that will be on Thursday 19 July 2021.

Join coaches Trevor Gary, Shirley, Sean and Hein to get your plan for success in motion with our 90 day planning event.

International clients/outside of South Africa – message mastery@actioncoach.com for billing in your currency. 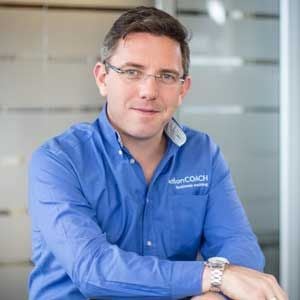 Harry Welby-Cooke is an entrepreneur, professional speaker and a leading business and executive coach.

He is the Southern African Co-Master Licensee of the largest business coaching company globally – ActionCOACH, which has served thousands of businesses and their owners around the world over the past two decades. Harry launched the brand locally 10 years ago, which today has an extensive national footprint and African representation in Namibia, Kenya and Nigeria.

Harry is co-creator of the ‘Saleability Model’, a business model created to build businesses for sale. He is also the founder and CEO of LegacyBRANDZ, a new venture aimed at businesses with purpose.

Committed to the coaching and mentoring industry in South Africa, Harry was elected and served as National President of COMENSA (Coaches and Mentors of South Africa) in 2012 and 2013.

As an articulate, confident and informative speaker, Harry has been invited to give talks at many business events, conferences and expos. His brutally honest yet highly entertaining manner is focused on breaking down the seemingly complex into easily executable actions.

He has appeared in countless business publications and has been interviewed numerous times on radio and television. He is a regular advice columnist for Entrepreneur magazine, Destiny magazine, Fin24 and SA Franchise Warehouse.

What makes Harry unique? A massive vision on what entrepreneurship can accomplish individually and collectively. Harry not only believes that people’s dreams of owning their own business are within reach, but also that this is the catalyst for creating the growth, employment and wealth needed on the African continent.

Before spreading his entrepreneurial wings, Harry spent 12 inspiring years at Standard Bank. He worked his way up the ranks, filling a number of management positions across retail banking, credit and risk management and providing a very broad based business background. He quickly realised that although many entrepreneurs have the passion, vision and even business plan to back their ideas, they often fail to bear fruit.

In 2006, as a now corporate refugee, Harry left the sheltered corporate world to open his own management consultancy. In 2007, he co-launchedActionCOACH in Southern Africa.

The entrepreneurial knock-on effect of his role in developing business coaching across Southern Africa, is what Harry says excites him the most. As head ofActionCOACH, which has over 1,000 offices in 59 countries, he delivers its proven business development systems to tens of thousands of business owners every week - owners who turn to business coaching to get the freedom and lifestyle they sought when they first went into business for themselves.

Harry is giving other aspiring entrepreneurs, who mostly emanate from executive corporate positions, an opportunity to run their own coaching business. They, in-turn coach and mentor business owners to grow profitable companies that contribute to economic growth.

Harry is an active supporter of Reach for a Dream Foundation. He believes the future of every person starts with a dream, and when given the ‘permission’ to follow our dreams, we can move mountains.

Harry is happily married and a father to a tribe of three gorgeous children (Tristan 16, Hayley 12 and Jonathan 8). A motorsport enthusiast, he also loves the outdoors, all racquet sports, is a goalkeeper coach, an average guitarist and a new, but still only noisy, drummer.

For more information get in touch with the office on 031 266 2258 or send an e-mail to mastery@actioncoach.com

An ActionCOACH is innovative, and their ideas support business owners and executives to achieve their highest potential.

Get in touch today for a conversation about how we can help you and your business.

Get news updates from ActionCOACH and learn about events, opportunities, Business Success Stories, and other inspiring articles.